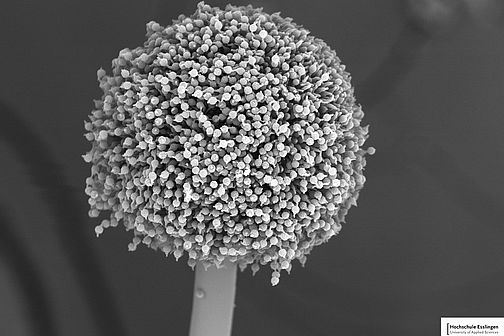 A fungus used in the food industry to produce citric acid.

To avoid charging effects, this image was taken with a backscatter detector, which is usually used to highlight material contrasts. The sample was coated with a layer of gold approx. 20 nm thick before the image was taken. 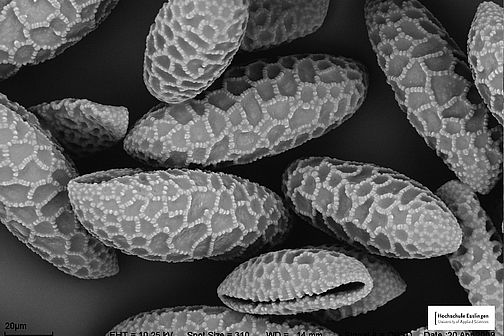 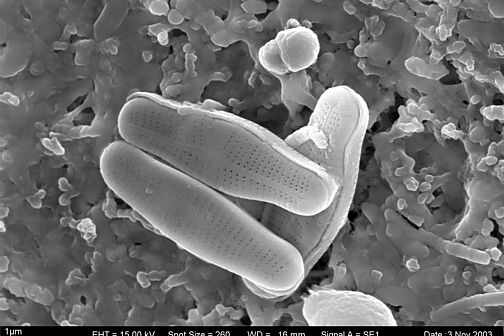 Diatoms on a water filter

An analysis of substances which were deposited on a water filter brought to light these diatoms.

Analyses of water filters are carried out in the course of contract work, the analytical results being used by the client as the basis for the construction of water treatment systems. X-ray fluorescence analysis is used to identify substances found on the filter. From carbon upwards, the elements contained in a sample can be determined qualitatively as well as semi-quantitatively. 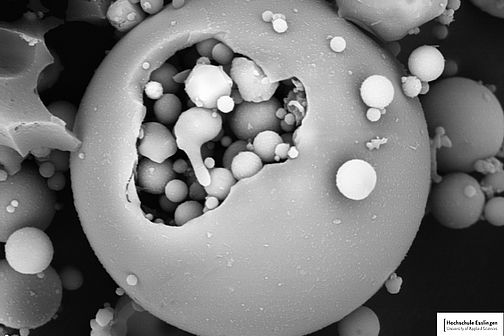 Silicates, released in the burning of coal in a power station and subsequently cooled down in the flue gas. Fly ash is used in plastics as a filler, among other things.

The particles were put onto a conductive adhesive tape, coated with approx. 20 nm gold and the image taken with the aid of a back-scatter detector. 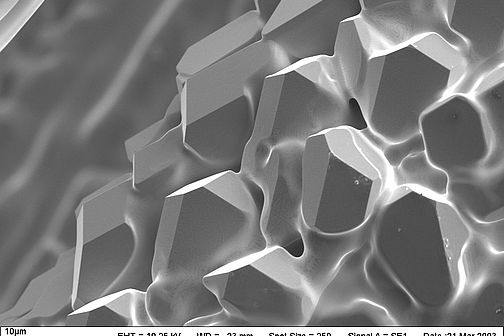 Tungsten crystallising out from the incandescent filament of a projector lamp due to the frequent heating up and cooling down.

The increasing crystallisation means the conductor cross-section becomes ever smaller as the current flow remains at the same high value. Increased heating of the ever-decreasing cross-section finally leads to the wire burning through. 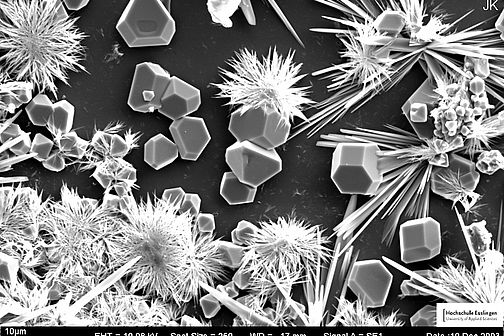 Sodium chloride and sodium phosphate (pin-shaped crystals) which formed as a deposit in a wastewater hose. The cubic face-centred structure of the sodium chloride (cubic with an additional atom in the centre of each lateral face) is recognisable on only a few crystal facets. Most of the crystals here are the result of smaller units growing into each other, thereby creating a variety of forms.

Sodium phosphate is used as a water softener (complexing of polyvalent ions) and for corrosion protection (forming an alkaline environment) for boiler feedwater, among other things. When it enters bodies of water, phosphate contained in wastewater affords a large supply of nutrients for algae and their increased growth can cause the body of water to die.